This is a live virtual webinar on Zoom. If you are unable to make the event live, please register and the recording will be available to you after the event.

This event is free to attend.
However, the Arvada Chamber and our partners at the Arvada Resiliency Taskforce have focused 100% of our efforts to mitigate the negative impacts of COVID-19 on the businesses and non-profits within our community. During this time we are exclusively committed  to providing information, resources and programming that will help the Arvada economy rebound more effectively.

We have a favor to ask. For those of you who are willing and able we would truly appreciate if you would consider a small contribution to our COVID-19 Economic Response Fund when you register for this event. 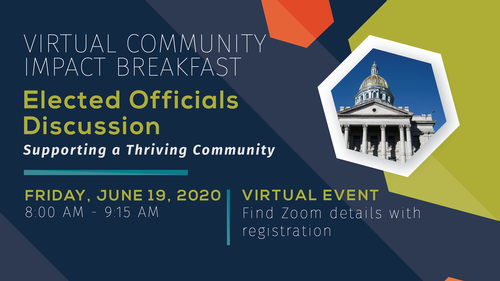 Don Davis, Jefferson County Manager
Don, born in 1968 in Dover, New Jersey, graduated from Dover High School in June 1986. He attended Rensselaer Polytechnic Institute in Troy, New York, receiving a Bachelor of Science degree in Management and was commissioned a Second Lieutenant in May 1990 in the United States Marine Corps.

From 1990 until 2017, Don served his country in many different roles, locations and commands. He was deployed numerous times, including to Iraq in support of Operation Iraqi Freedom and Afghanistan as the Commanding Officer for Marine Corps Logistics Command Forward. The last few years of his career in the Marines, he assumed command of the Marine Corps Logistics Base in Albany, Georgia for three years and then was the Chief of NORAD-NORTHCOM Theater Strategy and Campaign Plans Division.

After he retired from the military at the rank of Colonel, he moved on to his next adventure as County Manager, serving the citizens of Jefferson County, Colorado. He joined Jeffco in May 2017, where he enjoys serving alongside more than 3,000 dedicated employees.

Don is a graduate of the Marine Corps Command and Staff College; the Amphibious Warfare School; the Executive Leadership Program from the University of North Carolina Chapel Hill – Kenan-Flagler Business School; and the Marine Corps Executive Logistics Education Program at Penn State.  He holds two master's degrees; one in Public Administration from Webster University, graduating with high honors in March 1996 and a second in Strategic Studies from the Marine Corps War College in 2011.

Ray Gonzales, Adams County Manager
Raymond H. Gonzales has over 22 years of experience encompassing nearly every level of government administration. After starting his career with the U.S. Peace Corps, his roles spanned increasing responsibility from the U.S. Department of Labor to New Mexico’s Deputy Cabinet Secretary under the leadership of Governor Bill Richardson.

Although he found great success fortifying these agencies, his heart was in his hometown. Following his passion, Raymond returned to his hometown of Brighton to continue his family legacy as a third-generation resident of Adams County, Colorado. He currently serves as County Manager for Adams County, the 5th largest county, serving 515,000 residents, and one of the fastest growing counties in the state. Raymond oversees a budget of approximately $600 million that provides direct services for the community through four core service areas:
• Strategic Leadership & Planning
• Community Infrastructure & Development Services
• Community Services & Public Involvement
• People & Culture Services & Administrative Operations
One of Raymond’s proudest achievements is a newly dedicated People & Culture Services department, where he oversees the empowerment of over 2,500 employees and their personal impact, influence, and inspiration regardless of title or designation. He also oversaw the creation and licensing of Colorado Air and Space Port in Adams County, which has attracted national and international companies to become a technological and economic hub in the area. An ever-industrious conductor, Raymond continuously strives for organizational improvement and premier delivery of public art and opportunities to accentuate the culture of an ever-increasing innovative and inclusive community.
In addition to his challenging role leading Adams County, Raymond serves as the Vice President of the Mountain Plains region of the International City/County Manager’s Association Executive Board, as the President of the Local Government Hispanic Network Board of Directors, and as the Vice-Chair of the Scientific and Cultural Facilities District.
Business Directory Events Calendar Hot Deals Job Postings